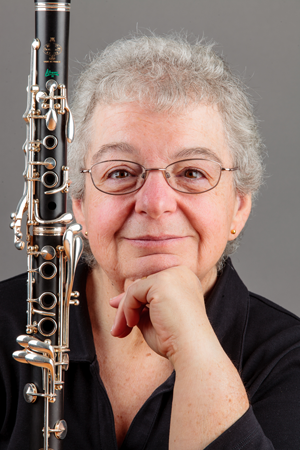 Sherry Mayrent earned a PhD in English from the University of Kent, Canterbury, England, and spent 12 years as a research associate at Harvard Medical School before attending her first KlezKamp (an annual Yiddish folk arts program) in 1987. Having begun to play the clarinet at age 9, she was an accomplished classical player when she began her study of traditional klezmer style.

Within a few years, she transitioned from student to apprentice to KlezKamp staff in 1995, and in 2001 she became the Associate Director of the program. Her KlezKamp experience led to her becoming the clarinetist and musical director of the Wholesale Klezmer Band for 16 years.

She left that group in 2006 to concentrate on putting together what has become one of the largest and most comprehensive collections of Yiddish and Hebrew 78rpm recordings, which she is having digitized and entrusting to the stewardship of the Mills Music Library at the University of Wisconsin – Madison. At over 9,000 recordings and growing, it represents over 6,000 unique performances and spans the full gamut of genres commercially recorded from 1895-1955.

The discs have all been fully catalogued with over half already meticulously transferred and digitally preserved by the Grammy-award winning sound engineer Christopher King. She was also the inspiration behind the founding of the Mayrent Institute for Yiddish Culture at that university, which was an outgrowth of her decades of involvement in the preservation and dissemination of Yiddish culture.

Sherry is also a record producer and prolific composer of klezmer tunes in the traditional style and has published several books of klezmer charts, as well as creating a volume of authentic klezmer styles for PG Music’s auto-accompaniment program, “Band in a Box.” Her passion for traditional Yiddish culture is equaled only by her love of all things Hawaiian, and she serves on the board of the Mohala Hou Foundation, which produces, among other projects, Aloha Music Camp, a week-long immersion program in all aspects of Hawaiian culture. She divides her year between her home in Watertown, Massachusetts and her home on the Big Island of Hawaii.